IMPORTANT UPDATE: THE AVICII LIVE IN MALL OF ASIA CONCERT IN MANILA ON APRIL 4 HAS BEEN CANCELED. THE NEW DATE IS MAY 15 2013

As we announced on Twitter a couple of weeks ago DJ Avicii is coming back to Manila in 2013. This time he will perform live in Mall of Asia Arena.

The initial opening DJ for the Avicii Live in Manila concert was Otto Knows. We are not sure if he will still be the opening DJ now that the concert has moved to another date.

Avicii in Mall of Asia Arena, Manila is brought to you by Driven Manila, World Wide Womb and Republiq 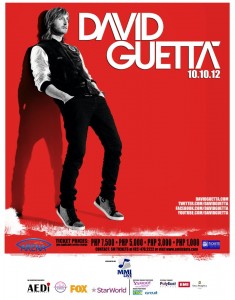 LMFAO coming back to Manila

LMFAO is coming back to Manila! For their Party Rocking tour they will perform live at Araneta Coliseum on Wednesday April 11. Tickets can be purchased via TicketNet.

On  Tuesday October 25  the official Black Eyed Peas Manila concert after party will be held at Republiq club. The party starts at 10pm.

Aferparty tickets can be bought at Cafe Republiq. For ₱1,500 you can buy a ticket that includes a Bronze ticket for the actual concert. If you already have a concert ticket you just pay ₱1,000 for the after-party ticket. 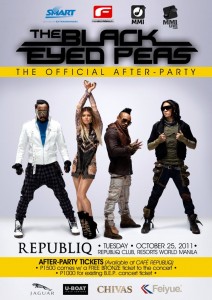