The Renaissance of The Establishment

UPDATE: This club is currently closed for renovation (Summer 2012)

Not a lot has been happening in the past 6 months in The Establishment. Now that both Encore/Embassy and Members Only are closed, we guess they thought it would be a good idea for an official re-launch. They call it “The Renaissance of The Establishment” and it’s happening on Friday August 5 2011 (see flyer below).

Starting August 5 The Establishment will have 4 weekly club-nights: 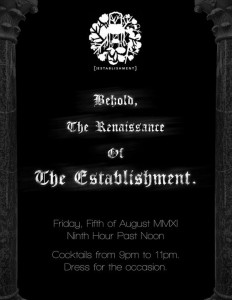 I have seen some of the promotors calling The Establishment “Opus of The Fort”, although we don’t agree with that, it’s definitely a really nice lounge/club and I hope the re-launch will be a big success and that The Establishment will become another exclusive hot spot in Manila nightlife.

The Establishment Manila is located at The Fort Strip in Bonifacio Global City (The Fort).

This page has moved.

Click here for the best clubs and lounges in Manila.