Manila’s best house club Time will finally have it’s official launch party on Friday September 16 with DJ Nick Warren. Nick Warren (UK) is one of the worlds best (progressive) house DJs (known for his Global Underground album series and as a member of Way Out West). 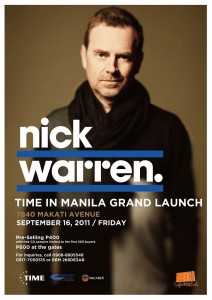